A sentence consists of a subject and a predicate, and every predicate contains a verb. The verb tells what the subject is or does. Sometimes, the verb is more than one word in the sentence. There are three main types of verbs: action verbs, helping verbs, and linking verbs.

Sometimes, a sentence has more than one action verb. In the sentence below, ticks and chimes are two action verbs telling what the old clock does.

The old clock ticks loudly and chimes every hour.

Use descriptive and precise action verbs to make your writing more vivid or colorful.

You might have wondered about the origin of teddy bears.

The following are common helping verbs:

The third of the three types of verbs is the linking verb. A linking verb "links" the subject of a sentence to the rest of the predicate. It does not show action, and it is not "helping" an action verb. Its purpose is to connect a name or description to the subject.

Woody was a folksinger.

In the sentence above, was links "Woody" with "folksinger." The word folksinger names Woody's occupation.

In the sentence above, was links "Woody" with "successful." The word successful describes Woody.

Common linking verbs include all of the "to be" verbs:

We identify types of verbs by recognizing how they are used in a sentence. Some verbs can be used as either linking or action verbs. To tell whether a verb is a linking verb, we replace it with a form of the verb "to be"—is, am, are, was, were, be, being, been, as in the example below.

We replace feels with is:

Because the sentence still makes sense, we know that feels is a linking verb in this sentence. Now, let us examine the word feels in the sentence below.

Yin feels the warmth of the sun.

We replace feels with is:

Yin is the warmth of the sun.

The sentence no longer makes sense, so we know that feels is not a linking verb in this sentence.

Tense means time. All types of verbs tell us not only what action is occurring but also when it is occurring. The form of a verb, or the verb tense, changes in order to show when the action takes place. There are three simple tenses and three perfect tenses.

The present tense refers to action that is happening now. We add an s when the subject is singular, except when the pronoun is I or you.

The past tense shows action that has already occurred.

The future tense refers to action that has not yet occurred. The future tense is usually formed with the helping verbs shall or will. With the pronouns I and we, the use of shall is preferable in formal writing.

Every verb has four basic forms, or principal parts: the present tense, the present participle, the past, and the past participle. They are necessary to form all the tenses of each verb.

The first principal part is the singular verb in its present tense form, which is used to express present time, something that is true at all times, and future time:

The third principal part of a verb, used to express past time, is the past tense, which we form by adding ed to most verbs.

There are three perfect tenses—present perfect, past perfect, and future perfect. The perfect tenses show that an action has been completed or "perfected." To form these tenses, we add a form of the helping verb have to the past participle.

The present perfect tense describes an action that occurred in the past and is complete or continuing in the present. We add the present forms of the verb have to the past participle.

PRESENT PERFECT TENSE = HAVE OR HAS + PAST PARTICIPLE

The past perfect tense describes past action completed before another past action. We use the helping verb had before the past participle.

PAST PERFECT TENSE = HAD + PAST PARTICIPLE

The future perfect tense describes future action to be completed before another future action. We add the future form of the helping verb have to the past participle.

FUTURE PERFECT TENSE = WILL HAVE OR SHALL HAVE + PAST PARTICIPLE

Three of the most frequently used verbs in the English language are be, have, and do. The tenses of these verbs are irregular; they do not fit the pattern of the regular verbs. Therefore, we must memorize them.

Verb forms often change according to three points of view:

Below are charts showing the verb forms of be, have, and do. 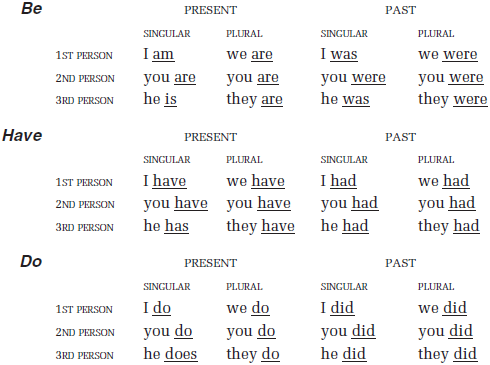 There are no rules for forming the past tense and past participles of irregular verbs. Fortunately, we recognize the principal parts of most irregular verbs just by hearing them. We must memorize the irregular verb parts that we do not know already.

Irregular verbs cause people trouble because it is easy to confuse the past and past participle.

There are many more irregular verbs that may follow the patterns above or may not. Always consult the dictionary if you are unsure.