A pronoun is a word that takes the place of a noun or a noun phrase. Rather than using the same noun over and over again, we use English pronouns.

Without pronouns, our language would be quite tiresome:

English pronouns are the words (such as he, she, it, we, they) we use to refer to people, places, and things that have already been mentioned. Pronouns are italicized in the examples below.

The noun or noun phrase to which the pronoun refers is called the antecedent. The prefix ante means "before", and the root ced means "go." The antecedent usually "goes before" the pronoun.

Notice the antecedents for the pronouns her and it in this sentence:

Each pronoun needs a clear antecedent. The meaning of the sentence below is unclear because the antecedent is unclear:

The following sentences are unclear because they each contain a pronoun that has more than one possible antecedent:

Yin and Eunice painted her fence.
Whose fence?
Yin's? Eunice's?

To make our meaning clear, we can use nouns instead of pronouns, we can rearrange a few words, or we can rewrite the whole sentence:

There are five main categories of pronouns: personal, relative, indefinite, interrogative, and demonstrative.

He will help them.
Do you have my jacket?

There are three forms of personal pronouns: person, number, and case.

I shall vote today.
We live in a democracy.

Second person is the person being spoken to: you, yours.

Will you vote also?
All of you are important.

Third person is the person being spoken about: he, she, it, him, her, his, hers.

He and she will vote.
They shall vote also.

Some personal pronouns are singular:

Notice that you and yours appear in both lists. These words can be either singular or plural. In fact, we cannot always tell which is meant.

Just like nouns, pronouns appear in cases. Case shows the job the pronoun is performing in the sentence. The following chart helps us to sort out the three personal pronoun case forms: (1) If a pronoun is a subject or predicate nominative, it is nominative case. (2) A pronoun used as a direct object, indirect object, or object of a preposition is objective case. (3) If a pronoun shows possession, it is possessive case. 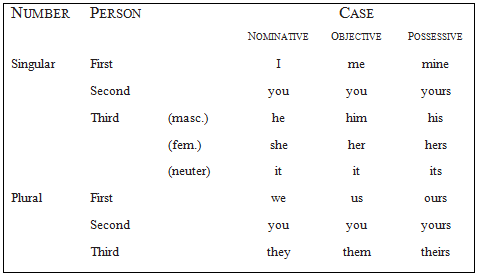 The pronoun case form depends on how the pronoun is used in the sentence.

Some pronouns are used as subjects:

Others are used as objects:

The following are simple relative pronouns:

who, whom, whose, what, which, that

WHO REFERS TO PEOPLE (OR TO ANIMALS THAT ARE PERSONIFIED OR "NAMED"):

WHICH REFERS TO ANIMALS OR THINGS, BUT NOT PEOPLE:

THAT REFERS TO PEOPLE, ANIMALS, OR THINGS:

Notice that we do not use which for people.

The relative pronoun who can cause problems, because it changes form depending on the part it plays in the clause:

Do not confuse whose and who's. Whose is a possessive or interrogative pronoun. Who's is a contraction for "who is." Possessive pronouns do not have apostrophes.

In the sentences below, we diagram the dependent clause to show how the pronoun is used.

The following are compound relative pronouns:

whoever, whomever, whosoever
whatever, whatsoever, whichever

Notice that we carefully choose whoever or whomever depending on the part the compound relative pronoun plays in the clause.

Who is there?
What do you want?

A pronoun that does not have a known antecedent is called an indefinite pronoun. It refers to a person or thing only generally.

Some indefinite pronouns refer to only one person or thing. They are singular and take singular verbs:

Everybody wants success.
Each of the students tries hard.
Nothing is impossible.

The following indefinite pronouns refer to more than one person or thing. They take plural verbs:

Both are fine.
Few were quiet.

The following indefinite pronouns can be singular or plural depending on their use in the sentence.

They are plural when they refer to things that can be counted.

Most offices are closed on holidays.

They are singular when they refer to something that cannot be counted.

Most of the pizza is gone.

This, that, these, and those are demonstrative pronouns. Some people call them "pointing pronouns" because they seem to point out the person or thing being referred to, distinguishing it from others.

This is an amazing world.
That is a flying squirrel.

A demonstrative pronoun must agree in number with its antecedent (the noun that it points out).

We use this and these to point out persons or things that are nearby in space, time, or awareness.

This is a calico cat.
These are my ideas.

We use that and those to point out persons or things that are farther away.

That was a foolish idea.
Those were the exciting games.

When the pronouns which, whose, or all of the indefinite or demonstrative pronouns come before nouns, they are adjectives. When they stand alone, they are pronouns.